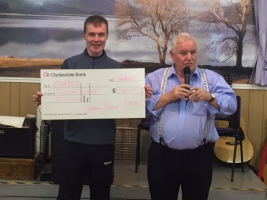 This donation was used to book buses to transport the members from their base in Sandy Road Renfrew to Johnstone to watch the performance of Rapunzel on the 30th November.
Enable Scotland has long had an association with Renfrew Victoria, supporting our fundraising events and benefiting from donations each year from the Summer Football Festivals held at Kirklandneuk.
The club opened the Socca Tottz Academy 4 years ago to provide youngsters aged 3-6 years old with an introduction to football by improving agility and learning the skills necessary to enjoy the game in later years.
At present the Academy has 42 enrolled and operates at Renfrew High on a Wednesday night at 6;30pm with new members welcome.
As the academy was evolving in 2013 local man Stuart Walker who attends Enable's Renfrew branch each week was approached to join in with the coaching of the youngsters and is now ever present each Wednesday to help out the Renfrew Victoria coaches who deliver the coaching sessions.
Attached is a photo of Stuart Walker presenting the cheque to club chairman Charlie Newlands in Sandy Road to cover the transport costs.
Stuart Wild, Chairman said " We as a club have the pleasure in supporting such a good cause over the years as the volunteers at Sandy Road provide a fantastic  service each Thursday night to the members attending the hall. Stuart never misses a session and is terrific with the kids in the academy." 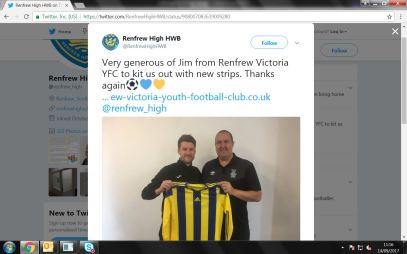 The Renfrew Victoria Youth Football Club has been lucky enough to receive donations through McDonald's Kit for Kids over the years.

Renfrew High school was delighted to receive a set of strips as part of the Club's commitment to charitable donations. No doubt it'll be put to good use!

Would you like to learn how to coach? Been a coach before and want to use your skills?

The Club needs new Coaches who are committed to running a team, working with other Club members.

If you are interested, please get in touch with our Chairman.

Training and support will be available.

Looking for a new team?

Then get in touch with a coach directly. Please click on the relevant year in the Teams section.